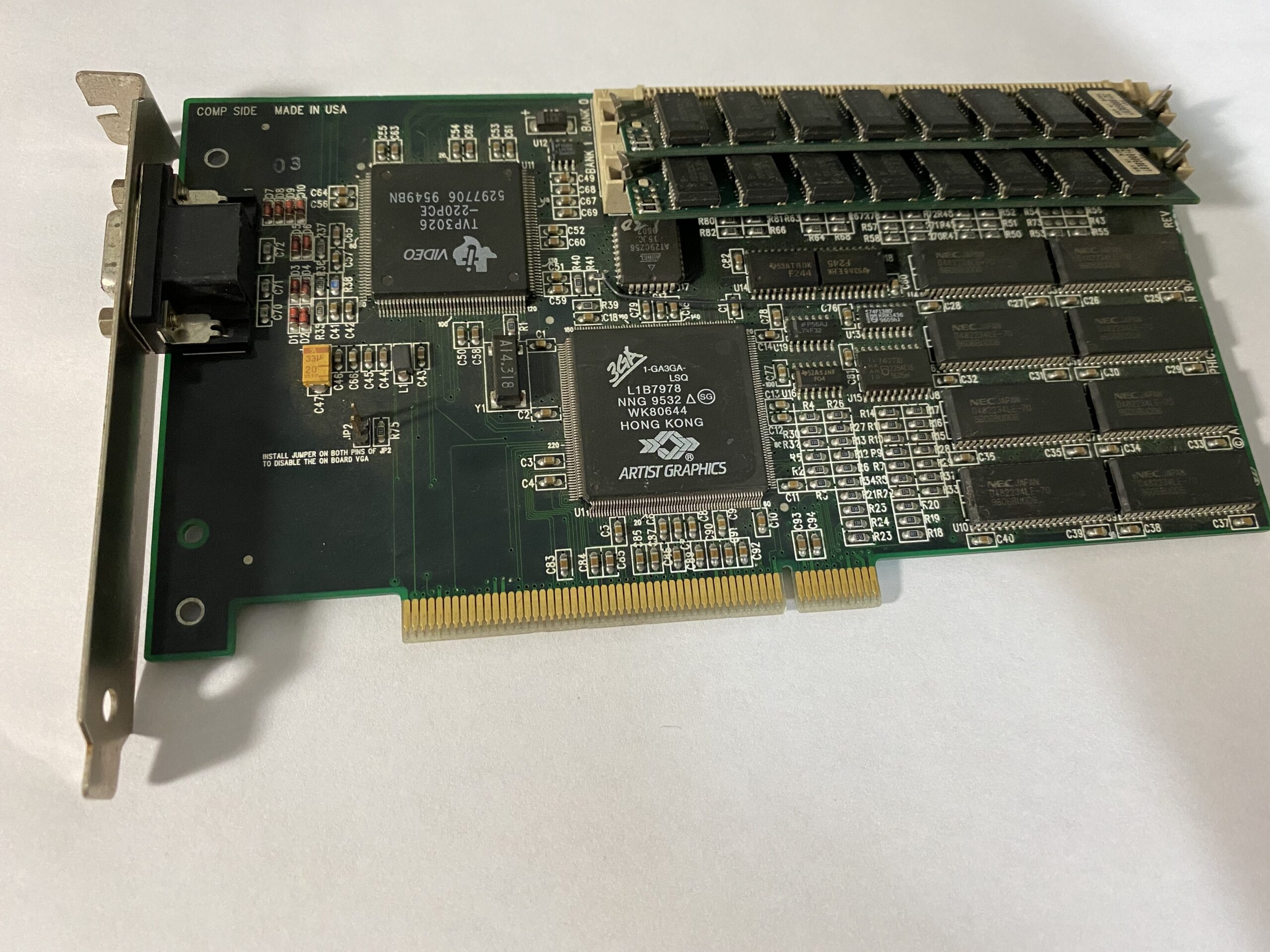 Why I started researching the Artist Graphics 2000i 2-meg PCI

I picked up a cool 25lb box of random ISA/PCI cards from the 80s-90s from someone in Georgia who was getting rid of them all. Had it shipped all the way to Canada and miraculously (and thanks to their great packaging) it all survived well.

In there was a plethora of cool stuff but one that stuck out for me was the Artist Graphics 2000i PCI.
Never seen a card with 72pin ram modules before.

It sent me down a rabbit hole I never knew would cost me hours of my life I’ll ever get back. This post is going to be an ongoing update of what I’ve learned.

Why the Artist Graphics 3GA Cards are Fascinating:

I started building a test-bench setup

So, it’s come time to start playing with this sucker.
I tried 3 different early socket 5/7 setups but I kept having issues.

Finally got a period-accurate Compaq Deskpro 2000 (Vetz would be proud eh?) w/Pentium 120, 64mb ram and a 512mb CompactFlash going. Got a fresh load of W95 installed and got the drivers loaded.

One driver listed on Vogons blue-screened the machine… It’s listed as:
Artist Graphics 2000i Display Drivers & Utilities for Windows™ v1.23 — But this is clearly the Windows 3.11 driver.
Ironically it does appear to load fine until you switch resolutions and then the OS hangs/Bluescreen.

The Windows 95 Driver on Vogons doesn’t actually contain an INF the card recognized and I tried the manual load methods. I was able to use the NetVision driver for W95 and it worked beautifully!

After I got all setup… fought the Compaq proprietary disk-based BIOS, the riser issues and other strange atrocities of vintage Compaq fun… Oh boy was I in for a treat!

Finally up and running || The Early Testing

I worked in computer stores in 96′-98′ and ran my own from 99-01 so I’ve seen countless driver installs.
Many basic cards don’t come with much for settings – some none other than what W9x offers you natively.

This one has it’s own branded tab in Display settings. It has greyscale adjustments, the full company info, VRAM recognized, mild overclocking and more. It also came with some utilities but they mostly just zoom and magnify things.

I’ve been testing it’s function in the natively supported acceleration types and I gotta say FOR THE PERIOD — it’s pretty impressive. Given the fact that the chip itself was originally devised/tested in 1992 (as mentioned in PC World 1992) if they had gotten it to market early enough not much would have competed with it! Sadly since it took till 95-96 by then we were seeing the NV1, Voodoo, and others.

Still I’m having a lot of fun learning about this and I’ve probably gone a wee bit too far.
I even reached out to Robert Beale but he hasn’t gotten back to me. Be fun to find out if they had any other plans for 3D accelerators before the tax man got him.